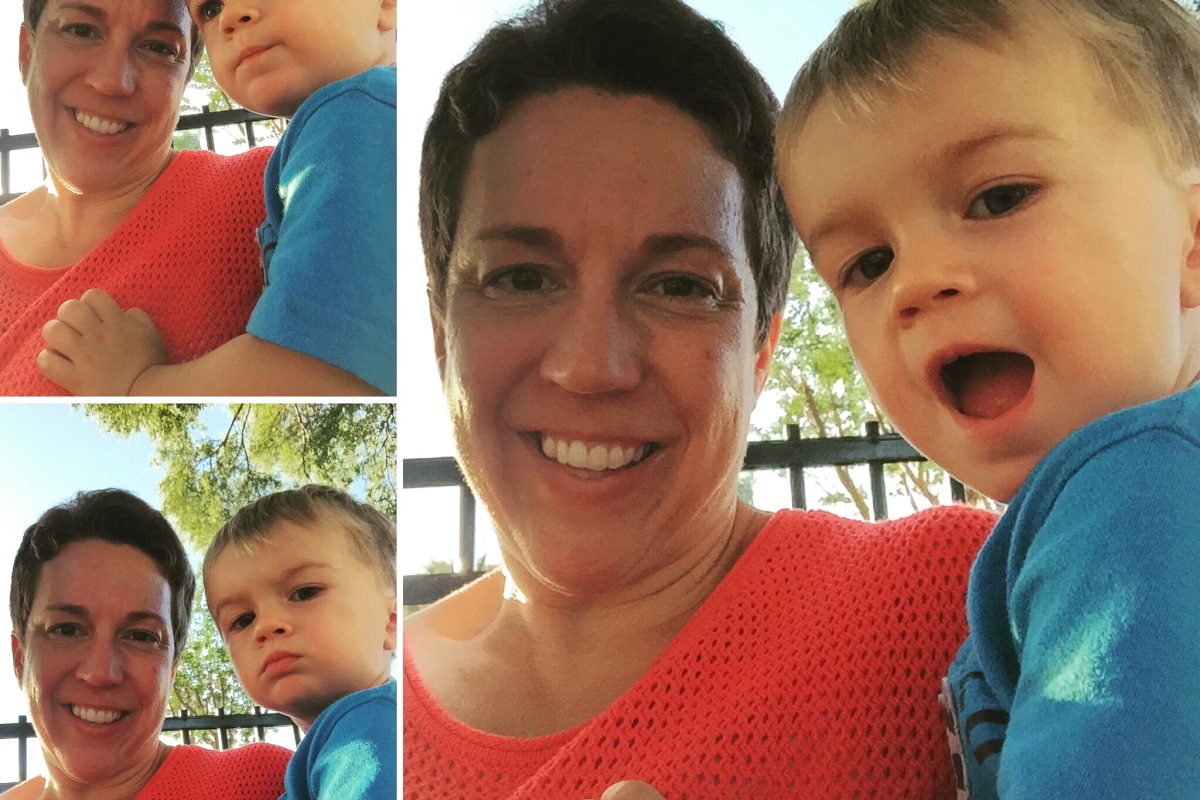 So last night we went out to dinner with some friends. Bryce was extra fidgety.  He wouldn’t sit in the highchair, wouldn’t sit in the booster, nor would he sit on our laps.  Thankfully we had a booth and he happily sat between us for the meal.  But not while sitting still.  Up and down, to and fro he went.  I tried everything to distract him.  Ipad? No.  Toys?  No.  Knife?  Yes. Wait, knife?!  Grab that from him! Ugh…

Finally I spied chopsticks sitting on the table and gave them to him. That worked.  For one minute. Until he decided to throw them at the older couple behind us.  Mortified, I apologized.  The guy, apparently a grandfather or at least a kid lover, came over to our table and gave Bryce his chopsticks back.  He bent over to his level, and smiled big for Bryce while saying hi little man.  Bryce, being the ham he is, loved the attention and started clapping and laughing, bringing even more attention our way. Soon three tables around us were clapping along with Bryce!  The rest of the meal Bryce happily clutched the chopsticks and never threw them again.

As a parent I will admit I do not keep calm during the storm. I am the parent that worries what others think, feel like I never can keep my kid behaved, and am anxious as soon as we leave the house.

Last night reminded me that most people at one point were in our shoes. That maybe, instead of seeing an out of control rambunctious toddler, they see a sweet almost 2 year old enjoying his time out with his parents and finding everything about the experience thrilling, including chopsticks being flung and then returned by a sweet couple.

This stage of life….it’s hard.  But it also has the most rewards.  Lesson learned.  At least until the next outing….

Happy Mother’s Day everyone! #feedingkoi #mothersday
Pics from walk this morning. Beautiful spring day! I will miss the heritage trail. It is a rails to trail project and this section is my favorite. So many scenic views! #heritagetrail #dubuqueiowa #walkingthedog
Saturday morning hike. It’s hot out today! Guess spring finally has decided to make her appearance. #whitewatercanyon #hikingfamily #whereiowastarted #thisisiowa
Checked out governor dodge state park today! Beautiful waterfall and good hiking trails. Definitely want to come back! House hunting in Illinois is a bust till we close on this house. I have never seen such a crazy real estate market as I am experiencing now. Houses up there selling in 12 hours if they are priced right and in a good school district. I know it will all work out for us, but definitely needed this hike today to take my mind off of “adulting” 😂 #hikingfamily #governordodgestatepark #waterfall #wisconsin
Look at this before and after Brian just did on his fathers machinist tool box! Came out amazing! #toolbox #beforeandafter #renovationproject #machinist #antique
Great spring day for a hike at Mines of Spain! #hikingadventures #minesofspain #familytime